A Holiday at Knockbrex Castle

This summer we had a holiday with a difference, we stayed in Knockbrex Castle.  This is a self catering castle,near Borgue, in Dumfries and Galloway in Scotland. It was a special family get together to celebrate my dad’s 80th birthday and my mum’s 75th birthday. The whole clan was there, my mum and dad, my brothers and their families. It was a really nice way to spend a week.

Getting to Knockbrex Castle was fairy easy. From Newcastle we took the A69 up to Carlisle. We had two choices, we could also have gone along the old Roman road which runs parallel to the A69. This is much more scenic but it is a Roman road so it is very straight. This means it goes up and down a lot of hills. The A69 can be a bad road if you get stuck behind a lorry or tractor as it is not always easy to pass them. It is single lane a lot of the way with no passing places. As it was a Sunday it was not that bad. From Carlisle we took the A74 (M) and then the A75 until we reached Gatehouse of Fleet. We then took some little country roads and did make one wrong turn down what turned out to be a farm lane, but the directions were generally clear and we made it safely. The whole drive took about three hours.

We drove into the castle driveway and were impressed by the imposing structure. The turrets gave it a fairy tale look. 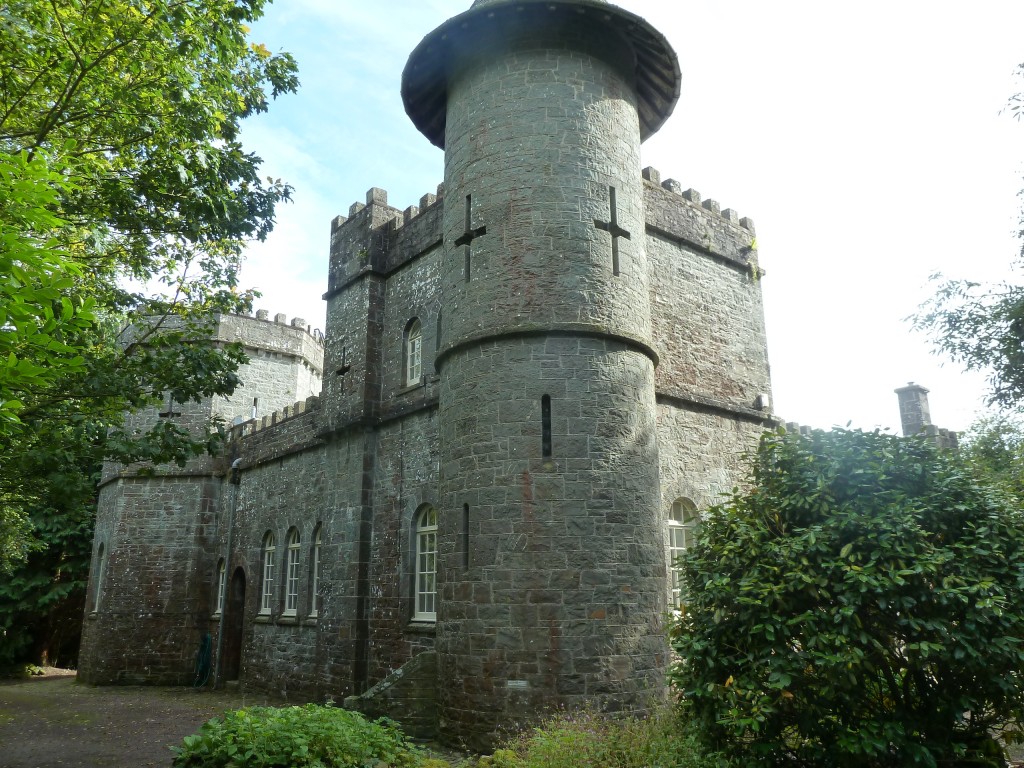 It took a little bit of finding which door was the way in, we were last to arrive so had to knock on several doors before finding one that was open. Once inside we had to have a good explore after greeting the family. On the ground floor is the kitchen. 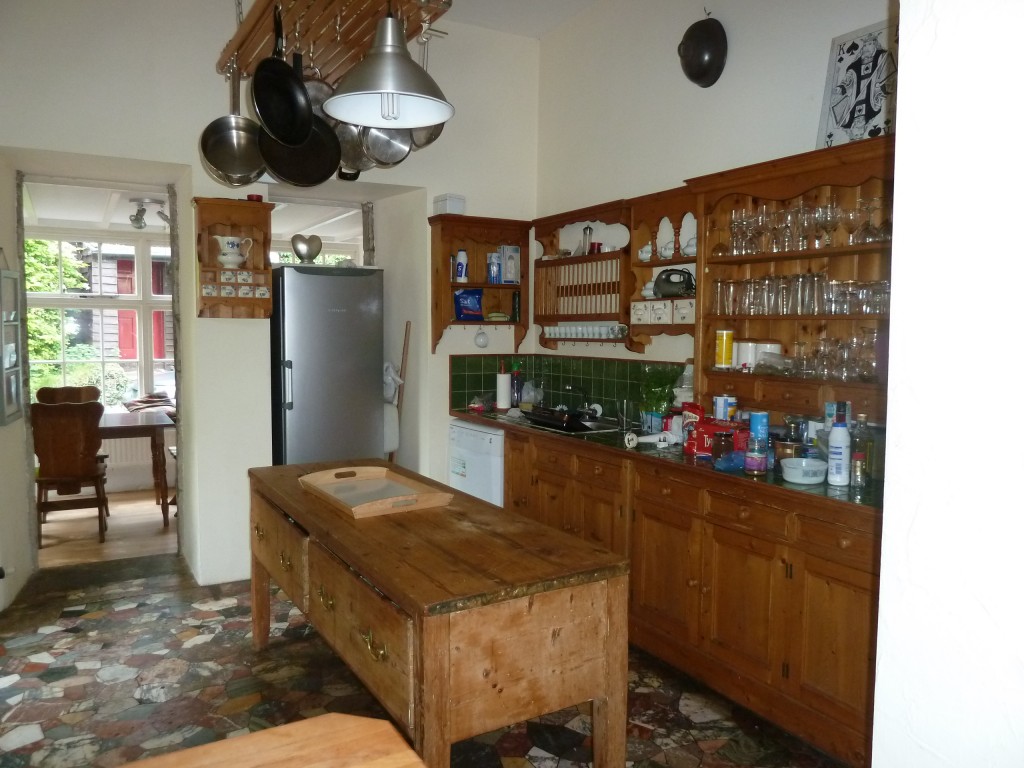 There is a small seating area off to the left which leads to a utility room containing extra fridges and a washing machine and dryer. On the right is a breakfasting area with a table which you can’t see. The wifi hub is also situated in this area so if you want an internet connection this is the best place to be. Leaving the kitchen you go down some stairs into the Great Hall. 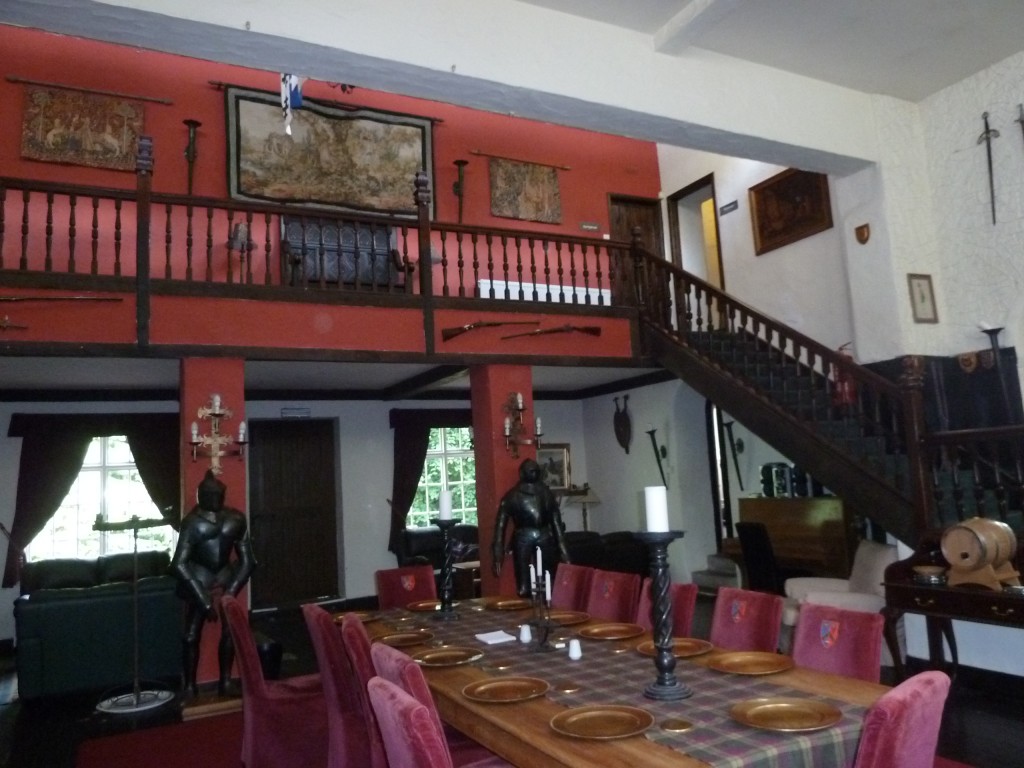 I particularly loved the two suits of armour at the head of the table. The walls are also decorated with various weaponry, swords and knives.  In this room there are also two snugs where you can sit and chat, as well as a rack of tourist information which is very useful.  Just off the Great Hall are two double bedrooms and on the other side there is a fireplace beside which stairs lead up into the games room. 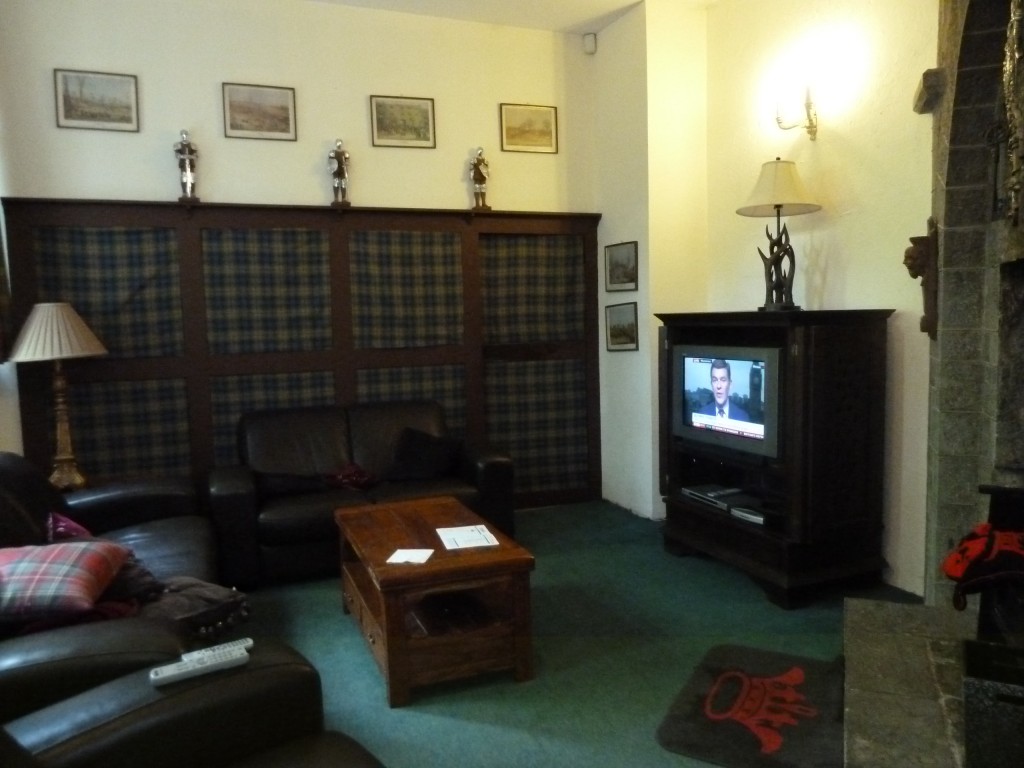 This is the games room, just behind where I took the shot there is a pool table and a set of stairs up to a turret bedroom which has twin beds and a shower. There is actually a secret door in the panelling on the right which is a short cut though to one of the bedrooms. The pool table was a great source of competition, with a family pool tournament one night. There is also a cupboard with some board games if you want to play these.

Upstairs you will find two more twin bedrooms and two double turret bedrooms, which have bathrooms attached.This was our bedroom, which was a bit neater when we arrived. 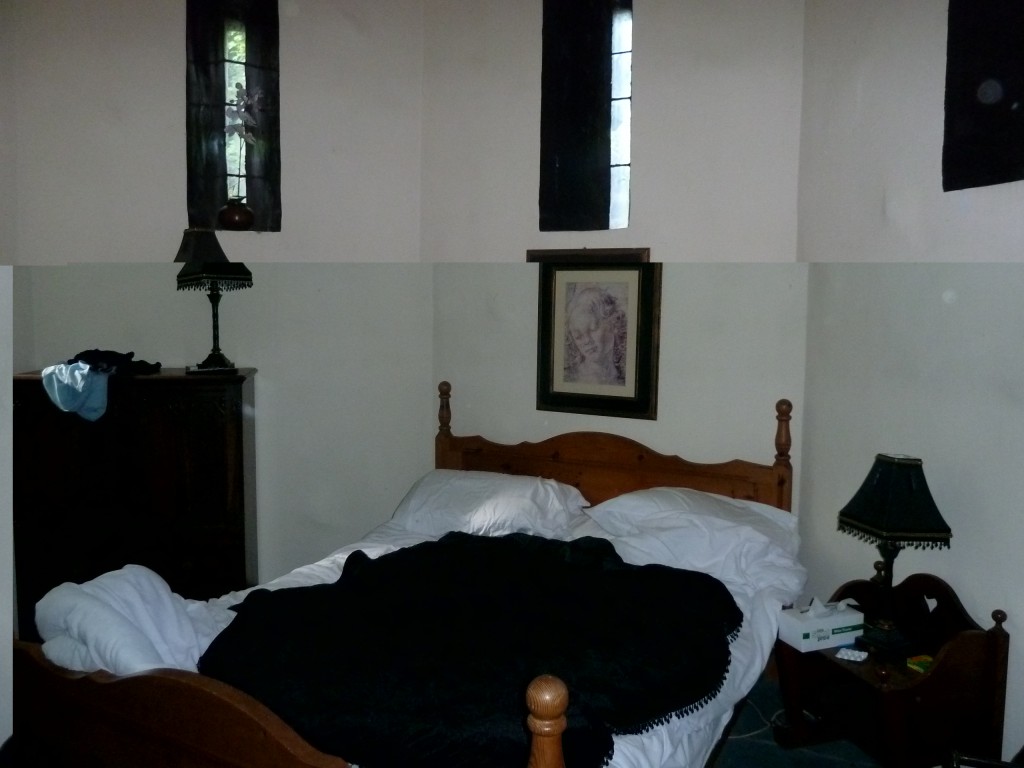 It was in the turret and we had a bathroom with shower a little way down the stairs. There was a door to the bedroom and at the bottom of the turret stairs so it was nice and private. I was happy knowing my son was just a short distance away in his room.

In the grounds outside there is also a little cottage which you can also rent if you have a very large party which sleeps six. There is a lawn area and a gravelled flat area which was great for playing boules, street tennis and football. This kept the kids happy.

The castle seems to have its own cat. 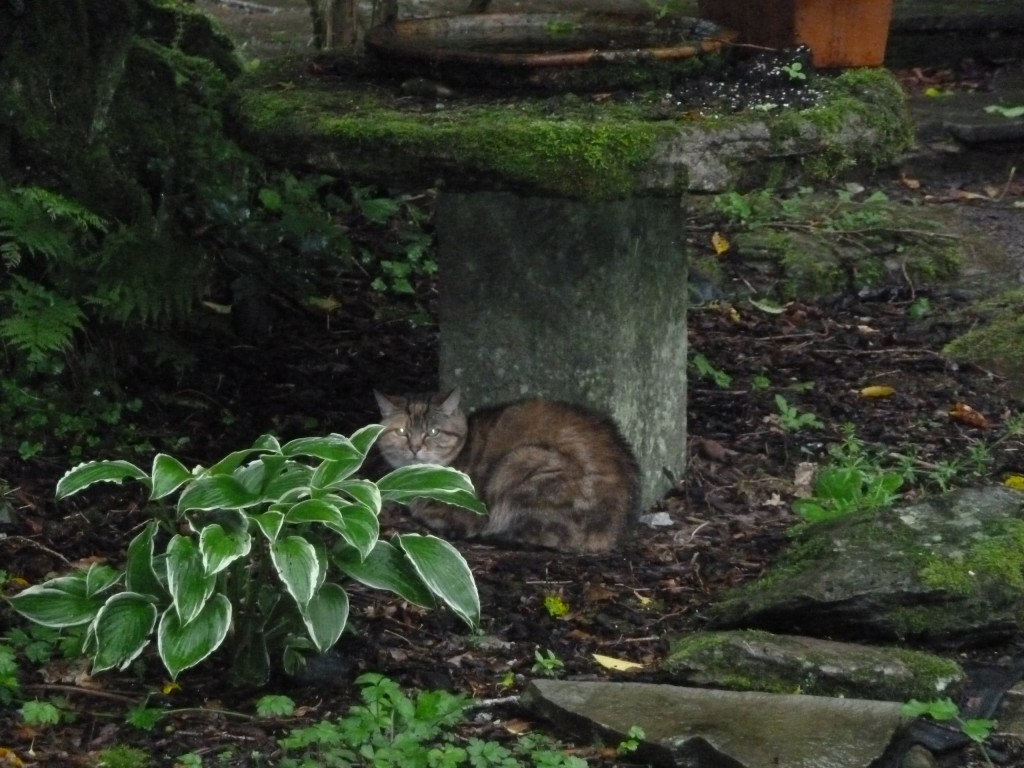 Every morning when we got breakfast she was outside the door yowling to be fed. In the evening she appeared as well and seemed to be partial to sheltering under this garden ornament. I am not sure if she belonged to someone or if she was just chancing her luck for food but it added a bit of character to the castle.

The castle is situated a very short walk away from a beach. 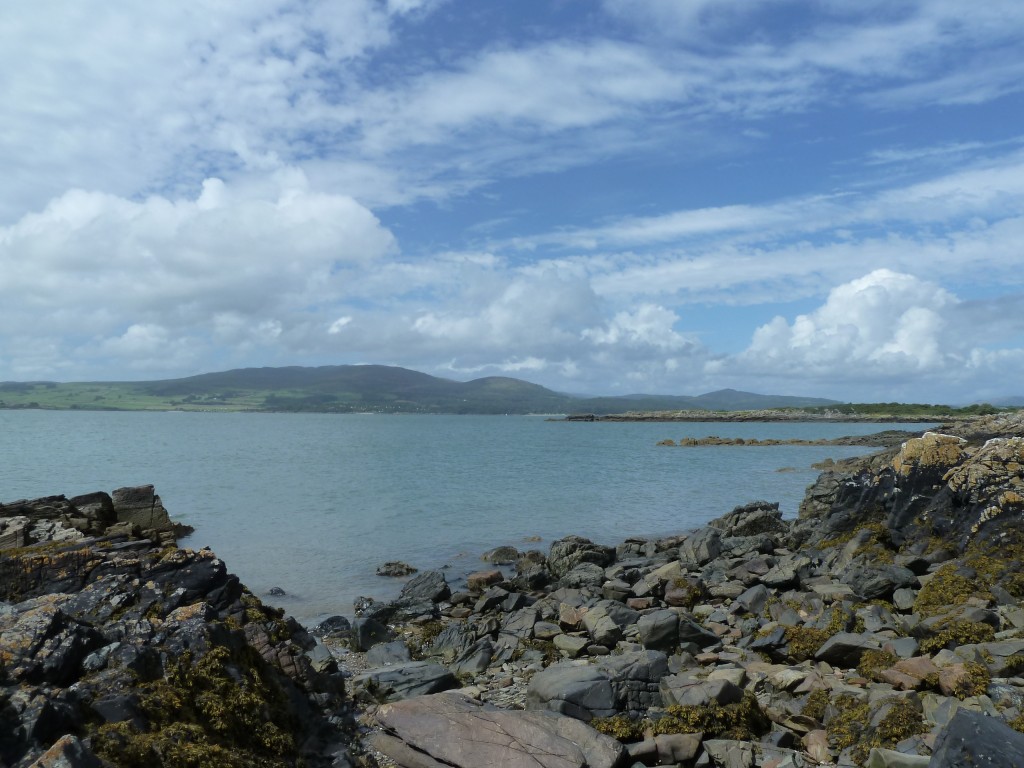 At low tide the beach is sandy. There is an island within walking distance that you can reach when the tide is out. We did walk across and it was not that far and was a nice walk. My son was a little bit worried he was going to get his toes pinched by crabs but he was actually quite safe. I think the crabs were more scared of him standing on them. There are lots of shells on the beach which you can pick up.

It is advisable to bring shopping with you, although Tesco do deliver.  The nearest village is Borgue which is 3 miles away and does not have a shop. The nearest shop was a Tesco in Kirkcudbright which is a further five miles on. If you are used to just popping out to the shop when you need anything it is a bit of a shock.  There is quite a lot to do in the area. If you like excitement then the Laggan Outdoor Activity Centre offers an 820m zip wire, mountain balling and grass sledging among other things. We did try to have a go on the zip wire but you need to book in advance and there were no places for the days we were there. We did find a nice chip shop in Kirkcudbright that is worth a visit, it is just by the harbour. 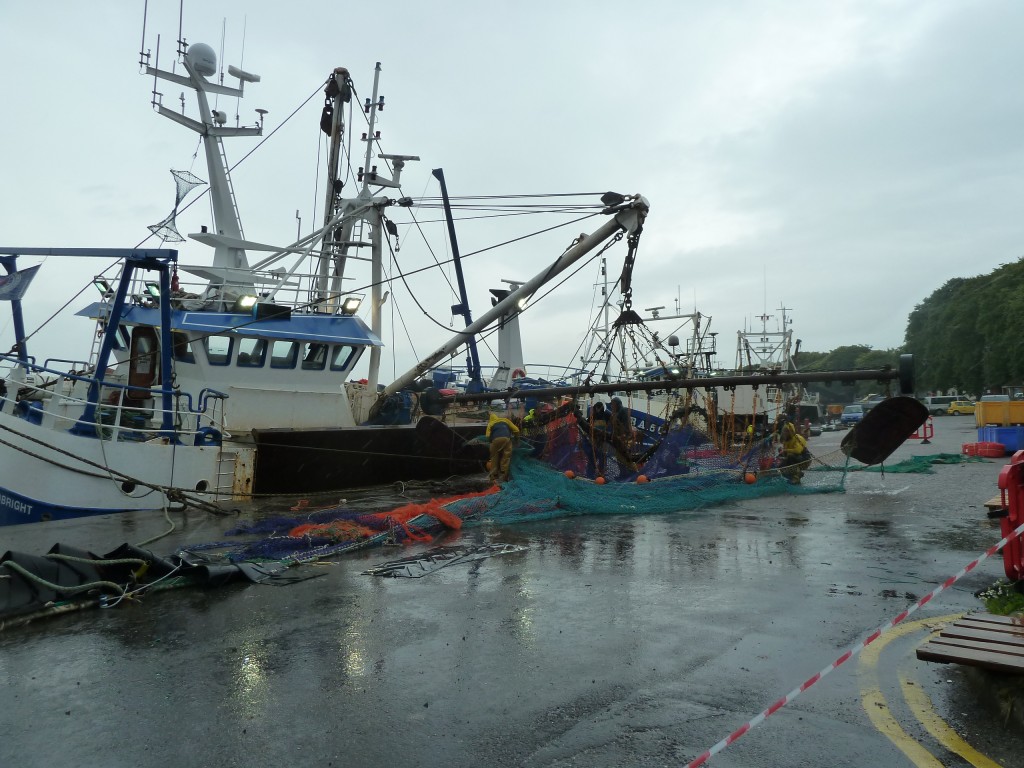 One place definitely worth a visit is Cream O Galloway. Cream O Galloway is a luxury ice cream and this is where it is made. You can have a tour of the farm and a chance to see how the ice cream is made with a chance to try ten different flavours of their ice cream. There are also rides for the kids and they got the chance to be thrown down the barrel run in a barrel, go down a zip wire and go on a kart ride round a big track. We had a big rain storm when we visited which stopped play a little bit, but it soon blew over and we thoroughly enjoyed the visit. Allow a reasonable amount of time for your visit and book your rides on the karts early as the time slots soon fill up.

Castle Douglas is also within driving distance and we were there at the same time the Stewartry Agricultural show was on. We decided to go and visit.  There was lots going on with livestock judging, horse events and a dog show. 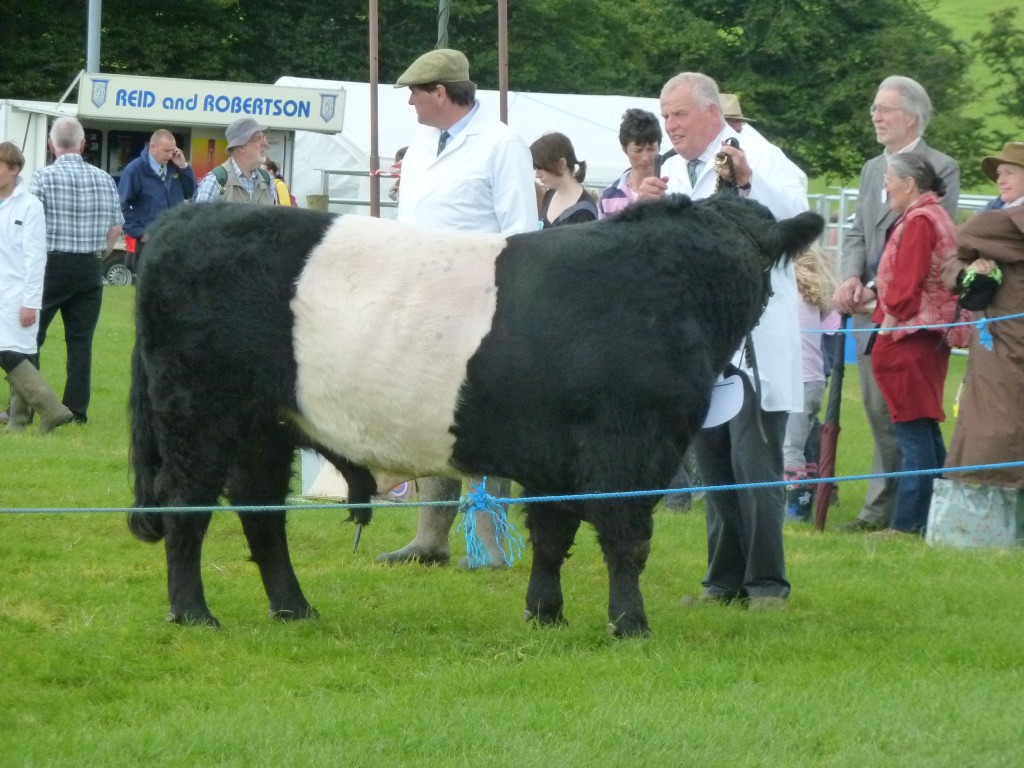 It was really interesting watching the different animals being judged and also seeing the variety of different types of animal they have. I never realised there were so many different breeds of sheep. 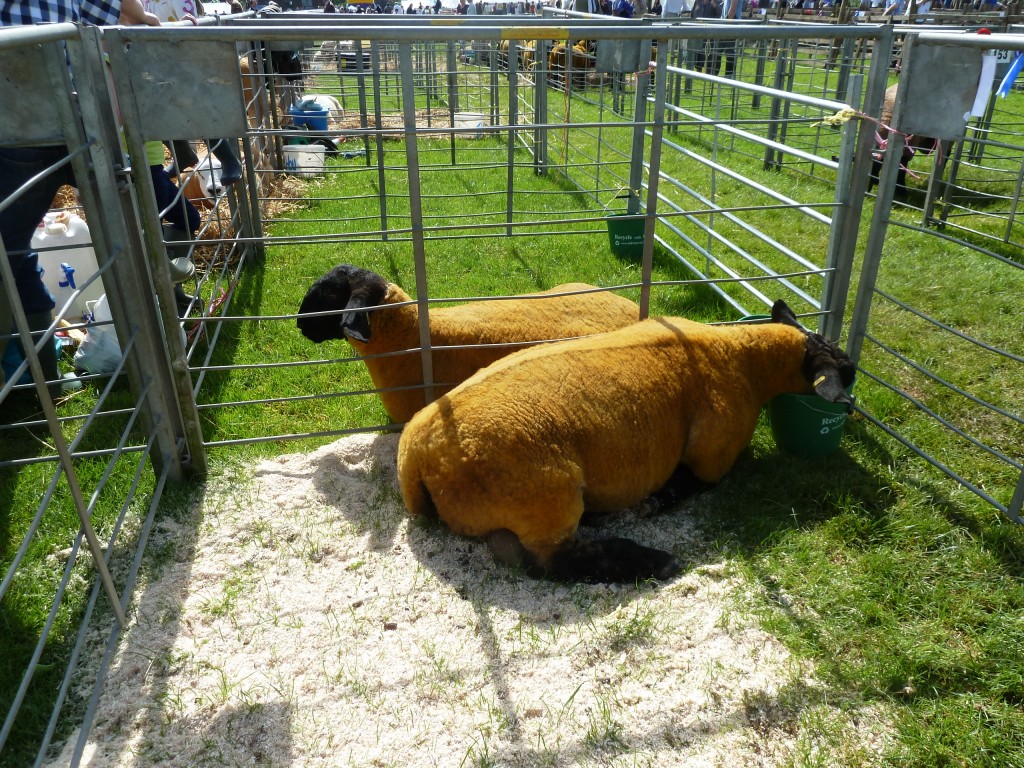 We spent quite a lot of money here as we discovered the craft tent which had lots of gorgeous home made cakes, sweets and crafts on display which were too tempting to walk past. Luckily it was a lovely sunny day or I think we would have needed wellies. It was a really interesting day and my son had never been to a country show before so it was doubly interesting for him.

It was a lovely way to spend a weeks holiday and it was great to catch up with the family. We had great fun having family quiz nights and pool tournaments in the evening. It was amazing to stay in a castle and definitely a once in a lifetime experience.

Since then we have had other holidays in Scotland, another trip to Dumfries and Galloway where we stayed in another large holiday home and a trip to the Highlands which is beautiful.

A trip on the Caldon Canal

A visit to the SS Nomadic, Belfast

A visit to Newcastle Castle

11 responses to “A Holiday at Knockbrex Castle”