A Visit to Crumlin Road Gaol

We are frequent visitors to Belfast and have been to the Giants Causeway and many other places. On a recent trip we paid a visit to Crumlin Road Gaol. The Gaol is no longer in use as a prison, it was closed as a working prison in 1996 when it was declared unfit for purpose. It has been restored and is now open for public tours as well as housing a conference centre. It is the only remaining Victorian Prison in Northern Ireland and has a colourful history. If you want to visit Crumlin Road Gaol I advise booking in advance. Guided tours run at different times during the day and this will guarantee you get a place without having to wait a long time. The tour takes just over an hour and costs £7.00 for adults and £6.50 for children.

You enter the prison via the gatehouse on the Crumlin Road. There is plenty of space to park. The overall structure is imposing with an ominous feel about it. Crumlin Road Gaol was designed by Sir Charles Lanyon and was based on Pentonville Prison in London. He designed many buildings in Northern Ireland including Queens University.

After you have purchased your tickets you have a wait until the tour begins. This gives you an opportunity to look around the museum and gift shop. The museum is interesting with lots of artefacts from the prison over the years. Many of these show the grim nature of the prison such as the hangman’s rope and the cat o nine tails. 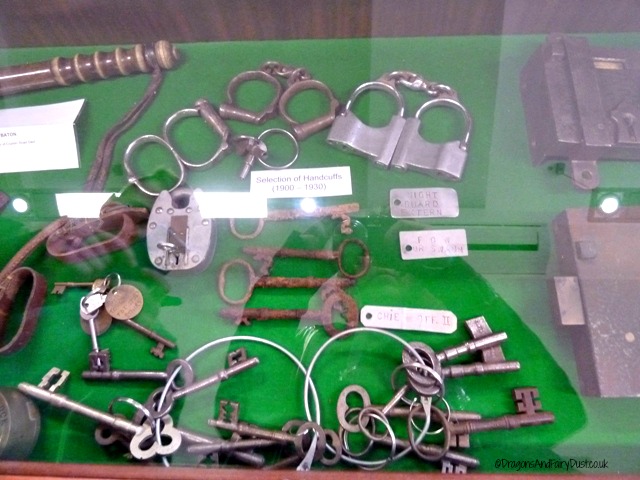 When the tour starts you are taken around the gaol as a group with a guide who relates fascinating information about the prison. When the prison first opened in 1843 it contained women, children and men as prisoners. The first prisoners had to walk from Carrickfergus in chains to Belfast, which is at least a ten mile walk. The prisoners then have to be processed and this is done in the reception area.

In this area the prisoners are stripped, searched and given a bag with their uniform in . They are then taken though into the main area of the prison where they are given a cell. Crumlin Road Gaol used the separate system to house prisoners, they each had their own cell and communication between them was not encouraged. It was the first prison in Ireland to do this.

In later years education was encouraged and this is a replica of a room where prisoners would go to learn. This was on the way to the main part of the prison.

What was interesting was the way identification of prisoners has changed over the years. Now we use DNA, fingerprints and photographs. In the Victorian days they had only just started using photography and keeping records of distinguishing marks. A fascinating photo wall showed how the records were kept.

Crumlin Road Gaol is situated directly across the road from the Crumlin Road Courthouse, a very impressive building that sadly is derelict inside. Prisoners used to be taken to the courthouse by an underground tunnel that goes underneath Crumlin Road.

The tunnel is imposing and must have been very claustrophobic. The pipes for heating used run though the tunnel and it must have made the atmosphere really humid and sticky. We were glad to get back outside.

We were then taken to see the Governors office, the only place in the prison where carpet was allowed.

You really get a sense of him sitting deciding the fate of prisoners who had misbehaved.

We were then taken into one of the wings that has been renovated. It looks really bright and airy but I imagine that when the prisoners were there it was a much more dank and disturbing place.

Along the corridor you get a chance to look inside each of the cells which give different ideas of prison life though the ages.  There was the medical office, the canteen and a padded cell which did not look a good place to be. This was  a cell in the Victorian days where one person was placed in a cell.

In stark contrast was a cell from the seventies, which is similar to the cells in the series Porridge with two or three to a cell.  None of the cells had toilets, even in the nineties prisoners had to slop out every day which was one of the reasons the prison eventually closed.

You have to remember that Northern Ireland in the seventies was the time of the troubles, where paramilitaries were in operation. I remember when we went into town in those days our bags were searched when we entered shops and people got on the buses travelling though the city centre to check them for bombs. It was a very tense time. The prison was not segregated but the prisoners ended up self segregating and would not take meals at the same time. In the early nineties an explosive device was detonated in the dining hall resulting in the death of two prisoners.

A chilling reminder of prison life is the condemned man’s cell. When the prison was first set up capital punishment was a part of prison life and men were frequently punished with the cat o nine tails. A number of men were hung in the gaol. When it was close to their time of death they were taken to a special cell which was much more roomy and had its own toilet, the only cell with one. They were given extra privileges. When their time came they would be taken into the toilet to prepare but behind the cupboard in the toilet was this room where they were hung.

It is a spooky place and makes you understand the harsh realities of prison. The men who were hung have been buried in unmarked graves in the prison courtyard outside and remain there to this day.

Crumlin Road Gaol is a fascinating and chilling place to visit. It is really interesting learning the history of the prison and how it changed over the years until it fell into disuse. It is chilling to learn about how life in the prison must have been and how executions were carried out.

A Visit to Kielder Water and Forest…

7 responses to “A Visit to Crumlin Road Gaol”