On the Great North Snowdog trail

Overnight the Great North Snowdogs have scampered onto Tyneside, arriving silently like the first snow fall of winter. Capturing the imagination of the North East these giant snow dog statues have caused quite a stir. People are on the Great North Snowdog Trail, tracking them down and trying to find as many as they can.

What are the Great North Snowdogs?

The Great North Snowdogs are a series of large snowdog sculptures based on the story of the The Snowman and The Snowdog, by Raymond Briggs. They have been scattered around the north east creating a sculpture trail which people can follow. Each sculpture is unique and has been painted by well known and lesser known artists. There are 61 large sculptures on display in in parks, streets and public spaces throughout the North East.

Also on the trail are a series on smaller Snowdogs or snow puppies that have been designed by local school children and community groups. The Great North Snowdogs are raising money for St Oswald’s Children’s Hospice and will be auctioned when the trail ends at the end of December.

Where can you find the Great North Snowdogs?

The Great North Snowdogs can be found in public places around the North East that are accessible by the Tyne and Wear metro. An official St Oswald’s trail map is available in various venues across the north east to help you find them.  The map is also on-line at www.greatnorthsnowdogs.co.uk.  Don’t forget to download the Great North Snowdogs App and enter the special codes on the snow dog plaques to unlock rewards and offers.

To help you see the Great North snowdogs by public transport Metro have a special Snowdogs Pop Pay as You Go Card available online at nlinestore.nexus.org.uk. You can also get one of a limited number of special Snowdogs family wristbands at a special price for a family of five (2 adults, 3 children) for all day travel. The snowdogs can also be tracked using the journey planner on Metro’s website.

On the Great North Snowdog Trail

I found a good selection of the Great North Snowdogs on the trail. Each of the dogs are unique sculptures with a story behind the design.

The first dog I found was outside St James Park. St James Park has a special place in the hearts of people who live in the Toon so it is apt that one of the Great North Snow Dogs is here. Standing proudly in his black and white stripes he is a great addition to the Toon Army.

Tails of the North East

Newcastle’s civic centre is the place where you go to register births, marriages and deaths. It is also home to some interesting statues. Underneath River God Tyne stands Tails of the North East. The mosaic design on his  contains scenes and stories from the north east.

There are two dogs on Northumberland Street, the busy shopping street in the centre of Newcastle.

Near the Theatre Royal and the monument you will find two more snowdogs.

Essence of the North 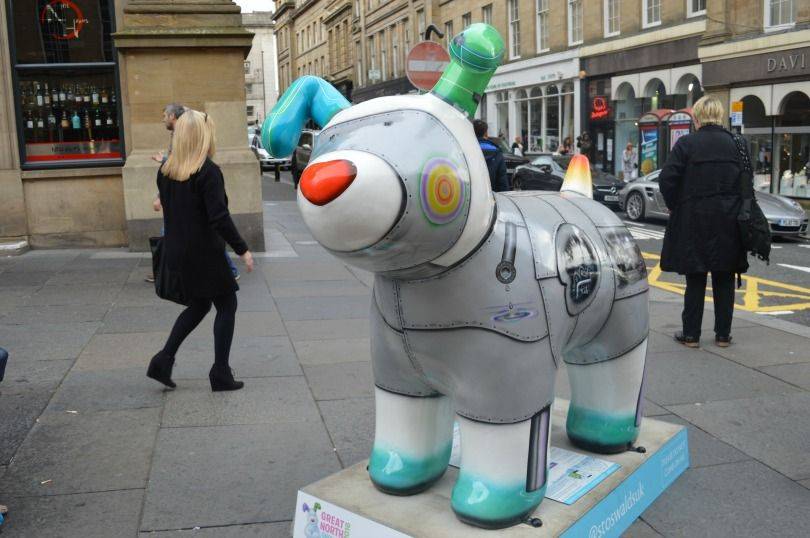 Essence of the North depicts the once thriving industries of the North East. References to mining and shipbuilding are part of his design.

There should be two dogs at Central Station but sadly one was damaged and not on the trail. He is there now so I will have to go back and visit.

Snowline is inside Central Station.

Fear of Emptiness stands outside the Crown Plaza hotel in the Stephenson Quarter. Plants trail though his fur creating a blue design.

There are around six more snowdogs in central Newcastle that I have yet to find.

Newcastle’s quayside is a vibrant and bustling place which is home to the quayside market on a Sunday. Along its length are plenty of eating places and hotels and it is a short trip across the Millennium Bridge to the Baltic which contains varied displays of modern art. There is also plenty of historical interest on the quayside. Bessie Surtees house is a Jacobean house typical of the merchant houses of the time. It’s claim to fame is it is the house from which Bessie Surtees eloped to marry John Scott who became chancellor of England.

There are three snowdogs on the quayside.

Outside the Broad Chare in the shadow of the Dog Steps and guarding the entrance to Trinity House you will find Hadrian’s Hound. Trinity House is one of Newcastle’s hidden secrets, a guild which was formed by the cities seafarers. The guild still licenses deep sea pilots and was responsible for setting up safe naviagation though the River Tyne. If you do get a chance to see inside you should take it, it is a fascinating place. Hadrian’s Hound tells of the Roman heritage in Newcastle with his Roman legionnaire uniform.

One of the more unusual dogs on the trail is Snowberry. Behind him you can see the vista of the bridges and Newcastle’s quayside.

The Dog on the Tyne 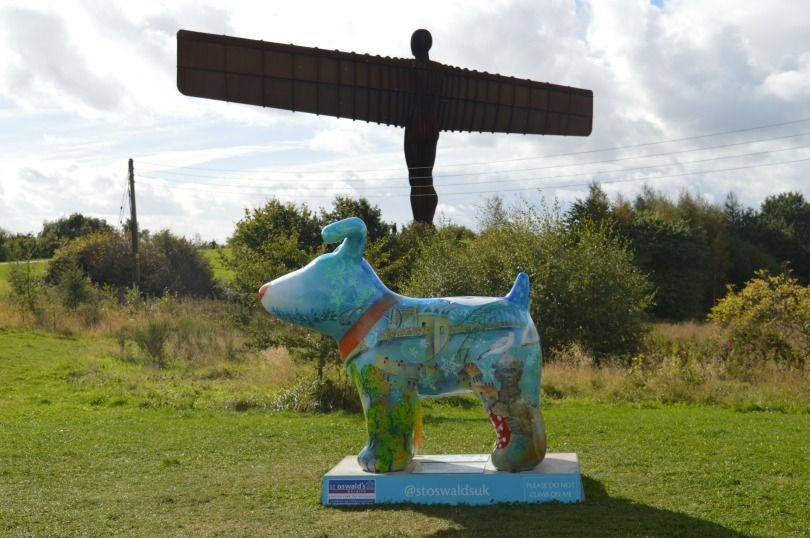 The Angel of the North is an iconic North East monument. The large angel with outspread wings can be seen from a distance when you are travelling on the A1 to enter or leave the north east. Under its shadow you will find The Dog on the Tyne. This beautiful dog shows destinations from the trail of the Great North Run in a way that is reminiscent of the flight of the Snow Man and Snow Dog in the film.

Outside the Sage against the backdrop of the Quayside stands Ziggy. Brightly coloured and zany this Great North Snow Dog takes inspiration from the shapes in the Baltic campus. Five north east landmarks are hidden in his design.

Inside the Sage I found a litter of snow puppies. The baby snow dogs have been designed by school children and can be found in packs near some of the Great North Snow Dogs. There are plaques next to them with information about which school designed them. It is a lovely way to involve North East children.

Standing tall inside the Sage the Disco Dog has to be the most glittery Great North Snow Dog on the trail. He sparkles in the sunlight throwing light across the auditorium of the Sage.

In the Ouseburn you will find  Seven Stories, the National Centre for Children’s Books. Standing outside is the original Snow Dog from the film.

In Marine Park South Shields you will find Rhino the Rescue. He represents all the rescue dogs in the world, those who found a loving home and those who still need one. While walking though Marine Park a large number of seagulls stand on the grass. These seagulls are enormous, I am sure they are much larger than normal seagulls.

Royal Quays is an outlet shopping centre in North Shields built on the site of the docks and next to the ferry terminal. There are two snowdogs here.

I hope he warms up soon!

Skipper celebrates the fishing port of North Shields and the comings and goings of the different ships on the river. He stands looking over the river watching the ships passing by.

Guide Dog is found by the Low Light in North Shields. The low light was a navigational aid to ships coming into the river keeping them out of the shallows. It is now a museum. Guide Dog features maps on his fur which encourage us to get out and explore.

Outside the Blue Reef Aquarium is Dog Fish, his design inspired by the fish and creatures in the sea. He has a good view of the beautiful North East coast.

There are plenty of other dogs on the Great North Snowdogs trail so why not try and find as many as you can? Have you been on the trail yet? How many have you found? Let me know below.

A Visit To Traquair House

8 responses to “On the Great North Snowdog trail”