A Visit to Lanercost Priory

Lanercost Priory is a medieval priory in a beautiful setting close to Hadrian’s Wall. The tranquil setting is deceptive, the priory has a troubled history.

On a wet summer day, we set off to visit Hadrian’s wall. We were hoping to visit the kite festival at Birdoswald, one of the many Roman forts along the wall. When we got there we couldn’t see any kites in the air. This was due to the rain. Noticing a sign for Lanercost Priory we went to explore.

Lanercost Priory is in Cumbria, about thirteen miles away from Carlisle and two miles from Brampton. It can be found off a minor road in the village of Lanercost. The Augustinian priory is near to Hadrian’s Wall and not far from the River Irthing. The location is secluded but practical.

The priory was founded by Henry II in 1166 and was in use until the dissolution of the monasteries by Henry VIII in 1536.  The buildings went to Thomas Dacre who made part of them into a private residence. The rest fell into disrepair until in 1740 the nave was restored. This is now a parish church that is in use today.  The remaining ruins of Lanercost Priory are run by English Heritage.

Being near the Scottish border Lanercost Priory was a target during Scottish raids. It was sacked four times. One raid saw Robert the Bruce bringing a Scottish army to its doors. The priory has also been a home to royalty, King Edward I was there for several months due to ill health. Lanercost Priory must have many tales to tell.

Lanercost Priory stands just off a small road which Hadrian’s wall runs alongside. There is plenty of parking. You can park in car park next to Lanercost Priory tearooms and gift shop. A small path takes you to the priory which is a couple of minutes away.

Alternatively, you can park next to the church if you go under the stone archway. Be aware there is a height restriction on the arch and the road is narrow. The tearooms are privately owned and we did not get a chance to visit on this occasion. The tearooms are dog-friendly and have a canine cafe where you can sit with your dog. You can also bring your dog inside the priory on a lead.

Entrance into Lanercost Priory is beside Lanercost church.  The parish church of Stain Mary Magdeline is still in use today. Services are held on Sunday and Wednesday.  There was a service on when we were there so we did not go in. Instead, we went to explore the priory.

You enter Lanercost Priory through the English Heritage gift shop. Stepping into the priory is like stepping back in time. You can almost hear the footsteps of the monks passing by.  Inside you will find the remains of the North and South Transepts.

Be careful as you walk around the priory grounds. In the 19th Century, Lanercost was known for boggles. Boggles are mischievous creatures who play tricks on humans. Watch out for strange noises, large dogs, white rabbits or white horses. These can be signs a boggle is present. Deter them with a silver crucifix or a bible. Boggle is a Northumberland word for ghost.

There is plenty to explore, even in the rain we found much of interest to look at. 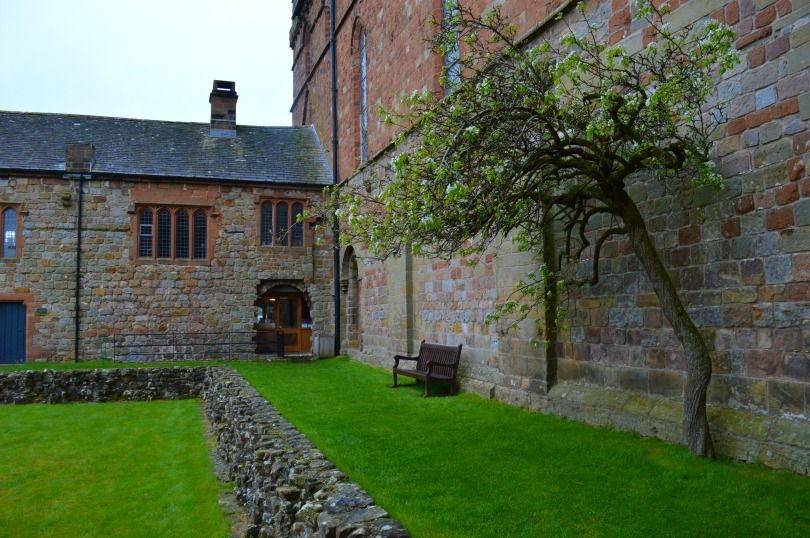 We took shelter from the rain inside the cloisters. There was a service going on in the church and the vaulted arches rang with the sound of hymns. This gave the priory a surreal and spooky atmosphere. You will find a number of ornate tombs here as well as a terracotta effigy of Elizabeth Dacre Howard who died at four months old. It is a poignant reminder of the family who made their home in part of the ruins.

Look carefully when walking about and you may some Roman inscriptions in the walls. The proximity to Hadrian’s wall gave the stone masons some great stones to use.

Lanercost Priory is an interesting place to visit and there is plenty to see. If you have time it is worth popping into the tearooms where you will also find an information centre.

Lanercost Priory is an English Heritage property and members get free entry. English Heritage membership is great value. Membership for two adults is £96. Each adult can bring six children under the age of 19.

Why not pin to remind you to visit later?

Have you been to Lanercost Priory? Let me know below.

Staying at YHA Once Brewed

A visit to Gibside

Game On at the Centre for Life

4 responses to “A Visit to Lanercost Priory”