I have to admit I have been frustrated with the camera in my mobile for a while. Standard shots were fine, but it had a distinct lack of features. When I am out and about I find all sorts of things I want to take pictures of and having a decent camera phone is a plus. A camera phone which a zoom that does not make things blurry is a dream of mine. I often want to zoom in on things, sometimes moving nearer does not work. 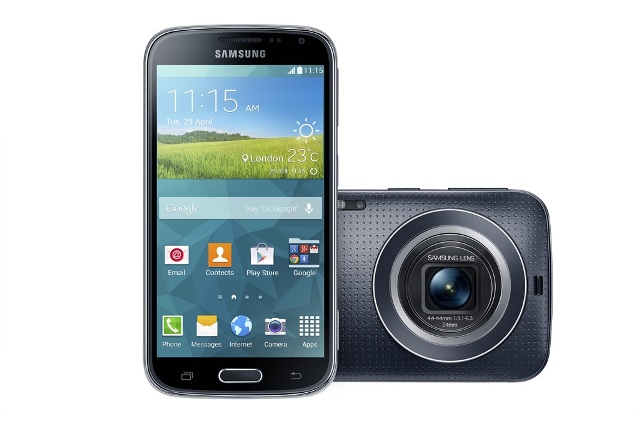 The Samsung Galaxy K Zoom mixes advanced digital and optical camera technology into a Samsung Galaxy phone. The phone is 4G ready and comes with a Exynos 5 Hexa processor for optimum performance and longer battery life. The camera has a 20.7 megapixel BSI CMOS sensor for clear images, a xenon flash and 10x optical zoom lens. The camera also has optical image stabilisation which helps prevent blurry images. The phone itself, whilst larger than the phone I had was comfortable to hold and did not feel too big. I soon got the hang of using it as a phone and tried out some of the camera features. We then set off on our family trip to Flamingo Land.

Flamingo Land is a theme park and zoo based near Malton in Yorkshire. It took us a couple of hours to get there but the drive is very scenic, though the North Yorkshire moors. We have visited Flamingo Land before but it was a few years ago. My son was excited to try out the rides, he was now tall enough to go on the big roller coasters, whilst I was looking forward to the zoo. The roller coasters loomed large over head. The sky was a little moody but the rain held off and it was quite warm. 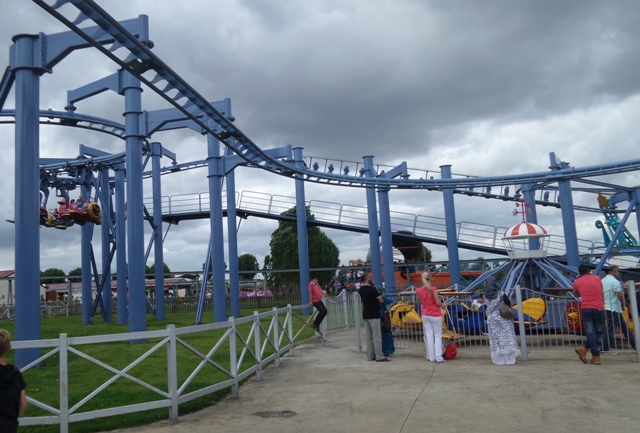 We had a wander round to get our bearings, the zoom roller coaster loomed over us,  the air rang with excited squeals as the cars full of people passed overhead.  My son opted to try the Pterodactyl and I watched as he soared overhead high in the air. He was moving fast but the Samsung Galaxy K Zoom captured the moment perfectly with no blurring. 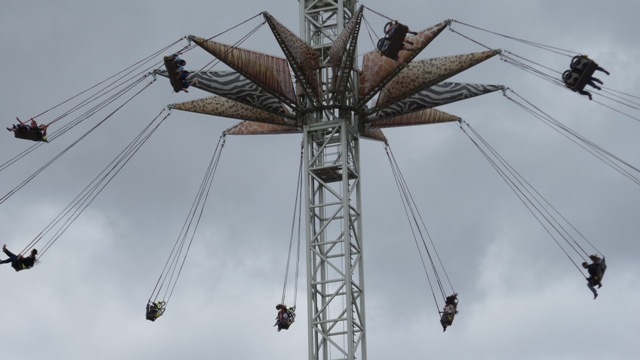 We wandered though the Splash zone, stopping to shoot a few people with water cannons as they rode the Splash Battle and watching as children climbed the pirate ship in the Splish Splash, trying to avoid the jets of water as they flew out. We managed to avoid getting wet only to get soaked later on the Lost River Ride. 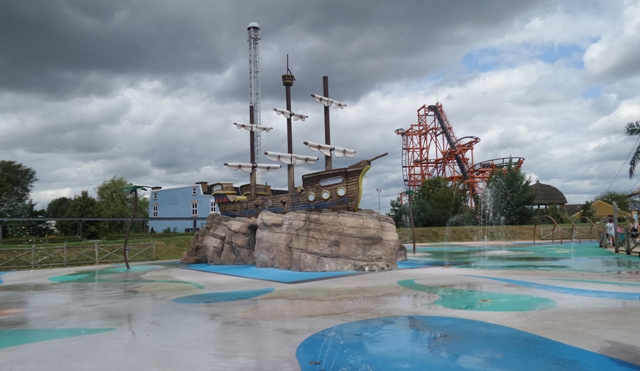 Passing the well named Wagon Wheel we headed for the zoo. We decided to take the train around the park to get our bearings and sat on this for a while enjoying the scenery. Later we went on the Monorail which runs from the top of the park to the bottom high above the park. It is a little wobbly but the views are good. 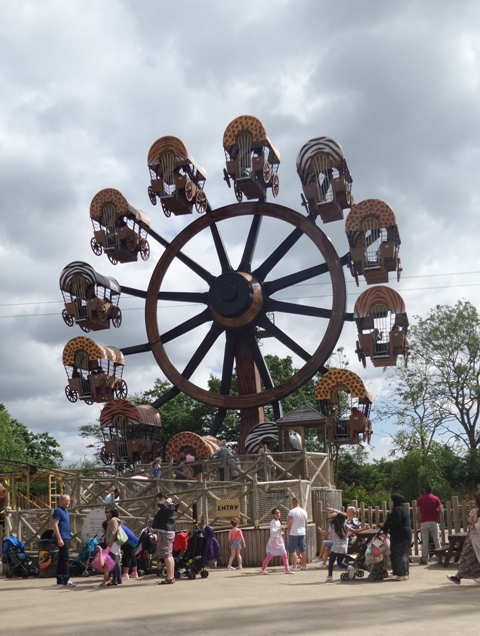 There are Flamingos in Flamingo Land but both times I have been I have failed to find them. We found lots of other animals though as we walked around.  These two rhinos were happily grazing in the field. 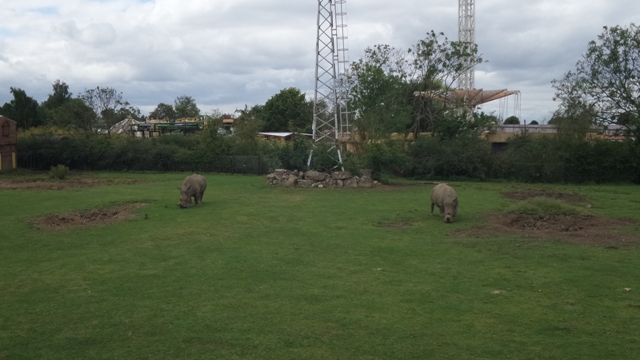 To test the zoom on the camera I zoomed in on one of them, look at the difference. He is close enough to touch and the photo is not blurred at all. It looks as if I am walking around the park with him. 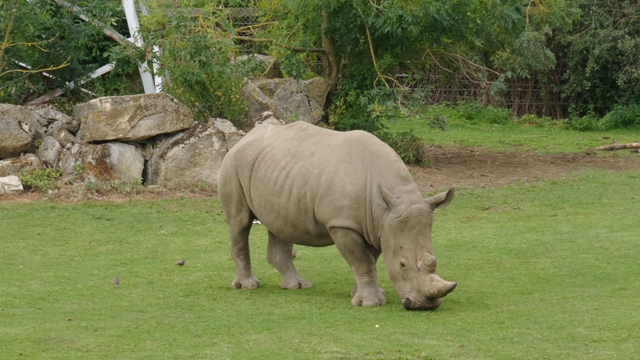 Giraffes ambled gently over to the trees where they stretched their necks up and reached for the leaves. There is something restful about watching a giraffe, they move in a very dignified fashion.

We watched the lions lazing about on the grass, they could not be bothered to move. Some of them were fast asleep, not bothered about the people passing by. 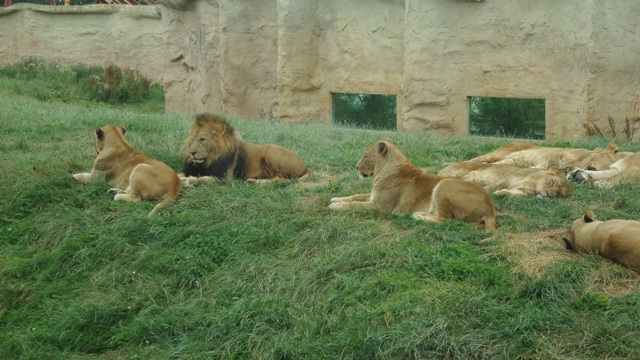 A mother tiger wandered out with her cubs and we chased them from window to window trying to get a photograph but they were too quick and disappeared back inside before I could. The male tiger wandered around from tree to tree before finally sitting so I could capture a shot of him. The Samsung Galaxy K Zoom has a clever feature, AF/AE Separation (Auto Focus/Auto Exposure Separation), where you can tap the screen to focus and then drag to adjust the exposure until it looks correct. I was very pleased with this shot. 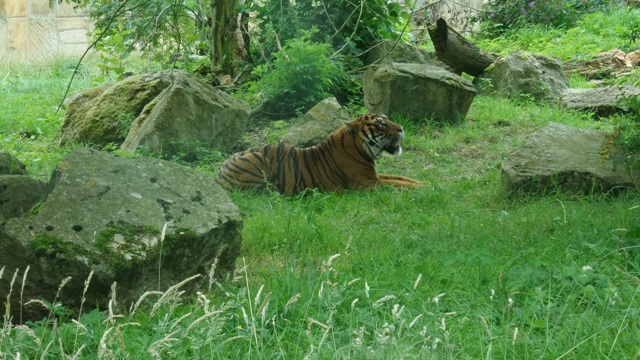 We ended the day with a few more rides, my son was very brave and went on the Cliff Hanger, one of Europe’s largest vertical drop rides. It was a great chance to try the object tracking on the phone out, along with the zoom and I got this photo of him as he shot up the tower at great speed.

He is gripping on for dear life but he said afterwards he really enjoyed it. We had a great day out and I was really happy with the camera on the Samsung Galaxy K Zoom. It has a host of other features that I have not fully explored yet, a studio app to let you edit your photos on the go, pro suggest mode which allows you to choose between 10 optimised filter settings to get the best photograph and selfie alarm mode to enable you to get great selfies. I don’t often take selfies of myself but my son was over the moon with this feature and wanted to try it out. The zoom is a feature that I really appreciated and is one that I will be making a lot of use of.

The Samsung Galaxy K Zoom is currently available in Carphone Warehouse, Argos, Littlewoods and will be in EE from 11th August. RRP £400. I was sent a phone and tickets to Flamingo Land in order to try it out as part of the 100 days of family campaign. Do have a look and see what all the other families having taken photos of.

A Visit To The Christmas Markets –…

9 responses to “Flamingo Land and the Samsung Galaxy K Zoom”