Custard Tarts from Beauty and the Beast: Lost in a Book by Jennifer Donnelly

These custard tarts come from  Beauty and the Beast: Lost in a book which is an addition to the classic story where Belle finds an enchanted book in the Beast’s castle.

When was the last time you were lost in a book? A good story has the power to draw you into the pages, keeping you turning the pages until you reach the end. Beauty and the Beast: Lost in a book is one of these tales. It is an addition to the classic tale, Beauty and the Beast. In the original story, a wealthy merchant loses his ships at sea and his wealth along with them. He has to move to a farmhouse and his sons and daughters have to work for a living. Some years later he gets a message that one of his ships has returned to port. He sets off to find out what wealth he may have left, asking his children what presents they want on his return. They ask for expensive goods apart from the youngest who asks for a rose.

The merchant arrives to find the ship’s cargo taken to pay his debts. He has no money for presents. On his way home gets lost in a storm and finds the Beast’s palace where he takes shelter. The Beast looks after him well.  When he leaves the next day he sees the Beast’s gardens and picks a rose for his daughter.  The Beast is angry and wants to kill him for picking his prize rose. When he hears it is for a present he relents. The one condition is the merchant or one of his children must return and keep him company.  Beauty or Belle ends up in the castle with the Beast. The Beast is really a handsome prince who is the victim of an enchantment. Only by finding love can he be free of the spell.

Beauty and the Beast: Lost in a Book by Jennifer Donnelly 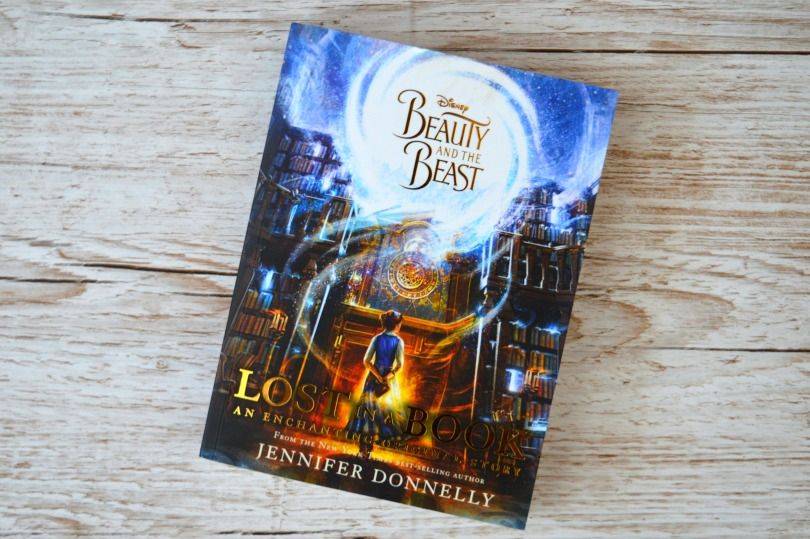 Beauty and the Beast: Lost in a book follows on from the animated movie. Belle is living in the Beast’s castle along with the Beast and his servants. The Beast’s servants are victims to the same spell as the Beast. They have been turned into animated objects,  a candelabra, a clock, a teapot and teacup. They will stay this way forever unless the Beast finds love before the last petal on the rose falls off. Death and love are watching and have a wager on outcome. Love is convinced Belle will win the heart of the Beast. Death will do her best to ensure this doesn’t happen.

At the start of the book, the Beast has given Belle his library as a gift. Bookish Belle is delighted and is on a mission to clean the dirty and dusty library to make it a place she can escape to. With the help of the servants, she begins dusting and cleaning. Even the Beast helps and we get a glimpse of his softer side. Soon Belle uncovers a hidden room which contains an enchanted book, Nevermore. She soon finds she can escape into the book and enter a perfect world, where she can leave her lonely world behind. She meets a countess who promises to show her the world. Little does she know the book has been put here by Death and soon Belle will find she is unable to escape the book.

The story is well written and pulls you in. The characters are enchanting and the interactions between them are realistic. There are a number of humorous as well as touching scenes.   The Beast does his best to win Belle over without being able to tell her why he is keeping her there. We get great glimpses of his character through the book. It is a great read and you wonder if Belle will escape from Nevermore right to the end.

Whenever I read a book I am always on the look out for food references like this boiled cake from Ghost Moth. Beauty and the Beast: Lost in a Book did not disappoint. There are a few references to food which caught my eye. The first was a reference to beignets. The Beast took Belle out skating on the frozen river as a surprise. He had arranged some food for her as part of the surprise and they had a lovely day together having fun.

Three familiar figures were busy setting up a small collapsible table with a steaming pot of hot chocolate, cup and saucers and a platter of beignets.

Beignets are square sweet French doughnuts with no hole in the middle which are traditionally served for breakfast in New Orleans. The recipe calls for a deep fryer which I don’t have. Looking for more food references I came across one for custard tarts. Belle found these whilst eating out in Nevermore.

There was plenty to choose from in that paragraph but I chose to make Portuguese custard tarts or pastiéis de nata. These are a traditional dessert with a rich egg custard in a crispy puff pastry that are a delight to eat.

These Portugese Custard Tarts take time to make but it is time well spent. The rich custard inside the flaky pastry is a treat that will please all. They are so nice it is hard to stop at eating one. Set aside a Sunday afternoon and take the time to make them. There are two parts to the custard tarts. The first part is making the puff pastry. If you are a great baker you can make the pastry from scratch. Life is too short to make pastry so I chose to use ready rolled puff pastry. It is easy to chop the roll into segments and flatten them into muffin tins to make a base. This gives you time to concentrate on making the rich custard.

The custard does take time to make but it is worth it. The taste is much richer than shop bought and it brings the tarts to life. There are a few steps to making this custard. Warming the milk with some cinnamon and lemon peel to add a little flavour. Making a sugar syrup and whisking it into the milk mixture. Finally, whisk the milk and sugar mixture into the egg yolks to make the rich yellow custard. Pour the custard into the tarts and the oven will do the work of setting it inside the tart. The only problem is waiting for them to cool. They look so tempting you will want to eat them straight away.

Why not pin the recipe to make later?

After making this recipe you will be left with six egg whites. Don’t waste these. Use them to make meringues and Eton Mess.

Linking up with Read, Cook, Eat over on Chez Maximka as the recipe comes from a novel.

I was sent the book in return for an honest review. My opinions are my own.

6 responses to “Custard Tarts from Beauty and the Beast: Lost in a Book by Jennifer Donnelly”