This week is National Breakfast week. After creating my brunch Scrambled Eggs I decided it was time to experiment and create something a little bit different. One of my favourite breakfasts is bacon and egg, there is something a little bit naughty about starting the day with bacon and egg and a cup of tea. The bacon needs to be crispy and the egg runny so the yolk mixes with the bacon. It sets you up for the day and leaves you feeling full. I wondered if it would be possible to create a bacon and egg cup, a bite size snack that enables you to eat your bacon and egg in one bite. 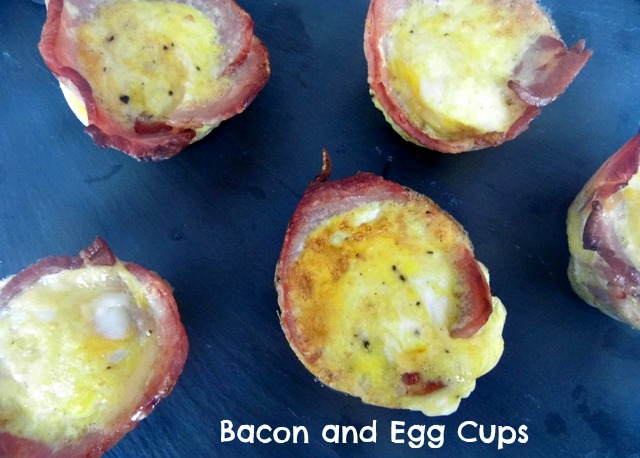 I believe I have created the ultimate breakfast idea. The eggs are baked in a cup of bacon and the result is a totally delicious mouthful. They look as if you have made an effort but in reality they are really easy to make. 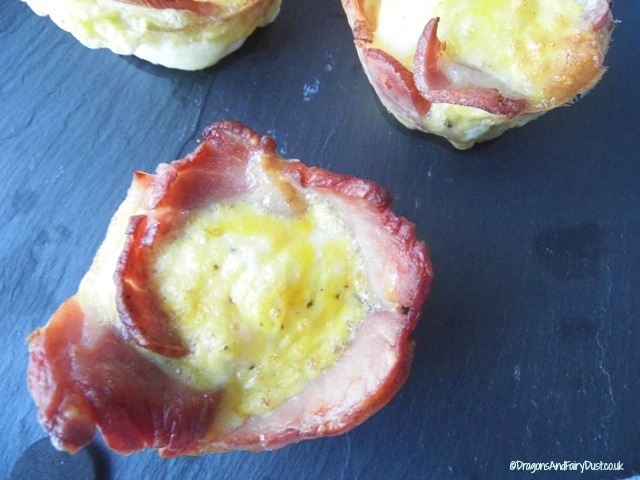 I also learnt something new, you can bake bacon. The clue should really be in the name, bacon, but I never thought of baking it before. I normally just grill it or fry it. Baking it is a revelation, the bacon turns out crispy and tastes nicer. If you put down silver foil on the baking sheet there is much less washing up. Baking the bacon is simple, place the bacon on a baking sheet and put into a cold oven. Set the oven to 200C, gas mark 6 and leave it for fifteen to twenty minutes. When it looks crispy enough remove it. Baked bacon can also be stored in the fridge and warmed up in the microwave later, ideal if you fancy a bacon sandwich for lunch. 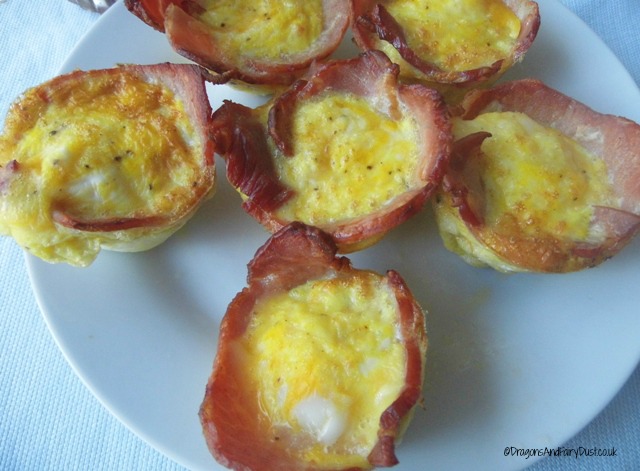 Once you have baked your bacon it is easy to turn them into bacon and egg cups. First you need to grease a muffin tin. Line each of the muffin holes with bacon, trying not to leave gaps. It is fine to layer the bacon in slices making a cup shape. In a bowl mix together four eggs, a tablespoon full of milk and two tablespoons full of cheese and pour into the bacon cup. Place back in the oven for ten to fifteen minutes until the egg has set.  If you want to add some variety you could add other ingredients like chopped onion, mushrooms, red pepper or tomato. I just added a sprinkle of black pepper. 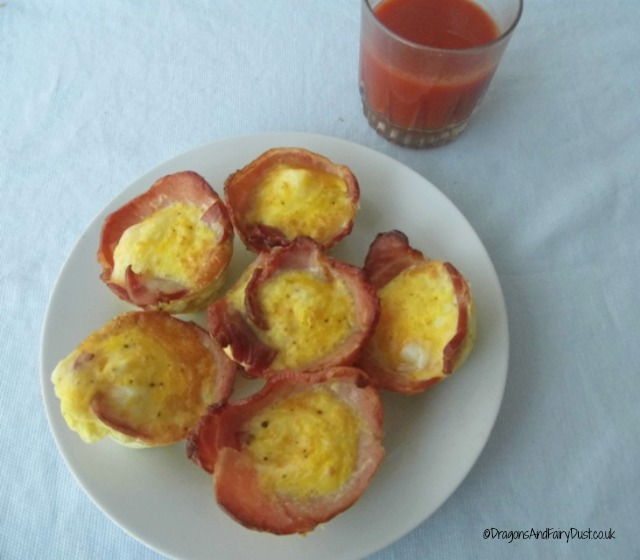 Then for the fun part, eating them.  I served them with a glass of V8 vegetable juice original which contains 8 vegetables in one drink and tastes delicious. This one glass contains a mix of tomato, carrot, celery, beetroot, parsley, lettuce, watercress and spinach providing one of my portions of fruit and vegetables for the day. There are no artificial colours or flavours, only contains 26 calories and perfectly complemented the bacon and egg cups. It is hard to believe that V8 uses the same recipe that it did when it was invented in Illanois in 1933. I remember my dad drinking it when I was a child. I used to love it then and still love it today. 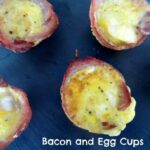 If wanted you can add extras like chopped onion, red pepper, mushrooms or tomatoes to suit your taste
I was really pleased at how easy this recipe was to make and the whole family really enjoyed it. I think it might become a regular breakfast feature on Sundays.

9 responses to “Bacon and Egg Cups”