A Visit To The Baltic

If you live in Newcastle you can’t fail to have noticed the Baltic on the banks of the river Tyne. Originally it was a flour mill but over the years it had fallen into disuse and was not being used. I remember it when I first came to Newcastle as a nesting place for seagulls. It is a very large and imposing building which in recent years has been renovated and is now an exhibition centre for contemporary art. Although it has been there for a good few years now I have never visited. My son went on a school trip to see the exhibition for the Turner Prize and he raved about it. When my parents were here we went to the Quayside to visit the Quayside market, but due to the large amount of rain it was not really open. We made the trip across the Millennium Bridge and went into the Baltic instead.

This is the view of the Baltic from the Millennium Bridge, you can see how it dominates the skyline. It is on the Gateshead side of the river.

The Baltic has four floors of exhibition rooms and the top floor is a restaurant. I recommend going up to the viewing platform at the top as the view across the river is spectacular. Unfortunately it was a rather grey day when we visited but I would love to see it in the sunshine.

The exhibitions change regularly. When we were there the top two floors were dedicated to work by Jim Shaw who is a Los Angeles based contemporary artist. The exhibition was called the Rinse Cycle and brought together work he had created over 25 years. We were not allowed to take photographs of the exhibition which was a shame but understandable.

The top floor of the two had a number of amazing back drops hanging from the ceiling. These had obviously been stage scenery at one point and Jim Shaw had modified them to make very striking designs. It’s a kind of mix of American pop culture with a hint of the sinister. As well as these striking canvases there are also sculptures. A normal looking chair with a giant nose hovering above it, a piano that houses its keys in the mouth of a tree monster that looks as if it might bite your hands off and what looks like a hedge monster, but if you look closely it is made up of cast off toys. It is a visit into the bizarre but enjoyable.

If you do go into the Baltic, do have a look into the stairwell. There are cunningly placed mirrors that make it look like the stairwell is ascending and descending forever. Be careful when you look down, it made me dizzy and I had to climb down using the further banister from the edge.

You are allowed to take photographs on the second floor and we wandered into a room which was filled with bizarre triffid like creations. 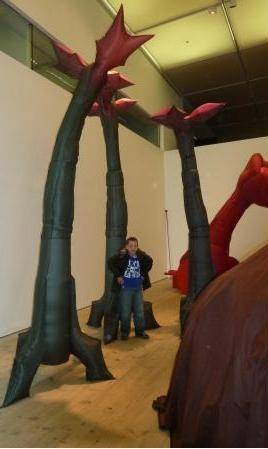 These are pumped up with air and while they look menacing are actually a play area. You are allowed to go in and out of the plants, if you remove your shoes. It was strange to see young children playing amongst these plant like structures.

The other half of the gallery has children’s toys and is a play area. It also has these two strange looking people standing in the corner.

There was another floor but we did not get time to visit that this time. It was a very interesting experience visiting the Baltic and I will be looking to see what the exhibitions are and going back again.

A Visit to Cragside

Visiting the Christmas Market in Belfast